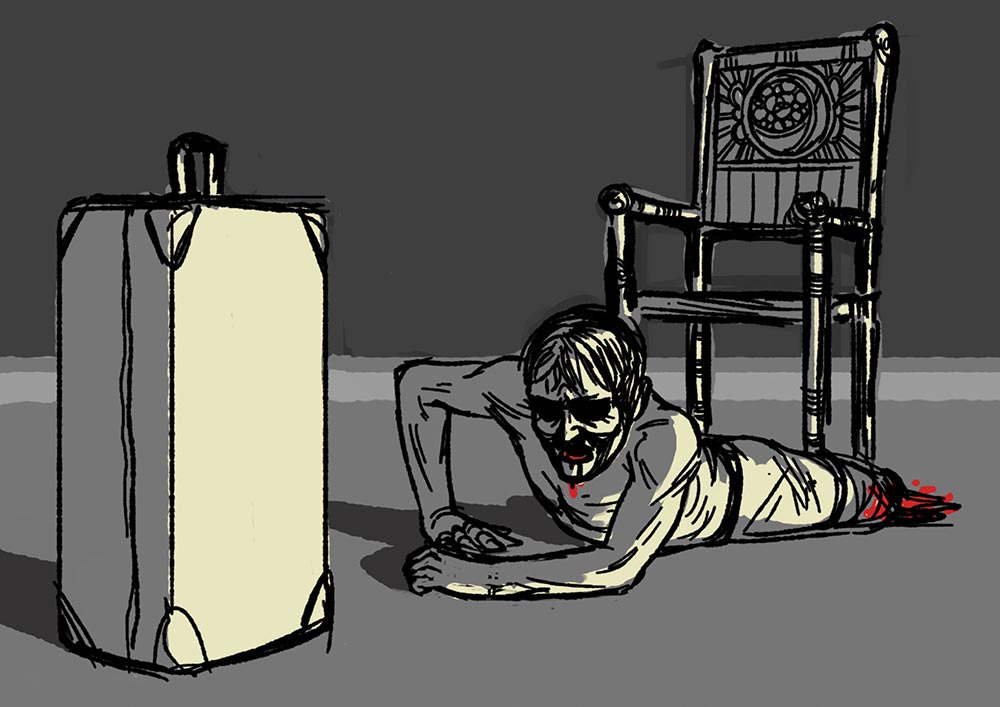 He woke. His bloody mouth opened and a tooth fell from his splayed gums.

The darkness of the room was deep and seemed endless. His eyes blinked as a small lamp on a desk next to him did similar. On the other side of the room stood a suitcase tall and proud, it stood like a mountain.

The room was long, with no windows or doors. He was sitting in a large wooden chair with a grand headboard and ornate carvings. His feet…. his feet. That’s when a strange revelation entered his head and his stomach lurched, his feet and lower legs were not where they were meant to be, in fact, they were completely gone. As he pulled a towel from over his lower half he saw two stumps at his knees, wrapped in cloth.

He began to cry like a child, he had been stripped of his freedom. He cried for a time and then fell silent, gathering himself in the darkness. He looked up and the suitcase caught his eye once more. This time it seemed to mock him through his pain. More and more it taunted him until he snapped.

His body weak from lack of blood, he stumbled out of the chair and began to crawl. He moved slowly through the dark. After a moment he gazed back to see his stumps were bloody, as the wounds had opened. He crawled further and further and it got darker and darker.

Slowly, a trail of blood followed him. Further and further he crawled. As he began to feel faint he did not stop, he pushed harder against the floor. The gap to the case closed down and when he reached the suitcase he was on the edge of consciousness.

He sank, rose and opened it.